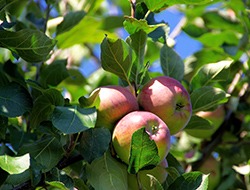 In Gothenburg there is a number of orchards where we, the citizens of Gothenburg (and maybe someone from Partille?) can pick fruit for your own consumption. Feel free to relax under the many apple trees of the city! Here we list all of the orchards and give a direct link to the different orchards on the city of Gothenburg’s website.

Altplatsen’s orchard
The orchard is located on a stone’s throw from Altplatsen. If you go from Altplatssen towards Fiolgatan it’s in between the houses. The space consists of a patch of grass with small artifical hills. Between the orchard there’s a boule court and a playground, which is located on the housing society’s land. There’s benches for you to enjoy your fika. Altplatsen’s orchard has three apple trees, four plum trees, six cherry trees and five walnut trees. Direct link.

Backa Röd’s Orchard
Backa röd’s fruit orchard consists of fifteen apple trees, one pear tree and three cherry trees. The orchard was built in 2013, next to Krumelurens play ground and communal sports field. In the adjacent cultivated area there is another pear tree and two apple trees, which you’re also allowed to pick fruits from. The cultivated area is run by Backa röd-odlarna. Direct link.

Bergkristallparken’s Orchard
The orchard consists of nine apple trees, three pear trees, prunes, plumes and cherries. It was planted in 2012. The orchard is located in the park that connects Bergkristallgatan to Beryllgatan. Next to the orchard there’s a sports field and leisure activities. During 2015 the park was renovated, with a new skate and action space. Direct link.

Billdals park’s Orchard
The orchard consists of 34 apple trees of 17 varieties. The orchard in Billdals park was planted in 2014, as a part of the refurbishment that was initiated then. The trees are planted near Herrgården. The trees have been placed in accordance to old maps of the park, there was probably a kitchen garden here back in the day. Direct link.

Eriksbo’s Orchard
The orchard in Eriksbo has eight apple trees, five pear trees, one cherry tree and black currants. The orchard is located in a slope near Eriksbo’s school. There is a round picnic table in the middle of the orchard. Direct link.

Gårdstensdalen’s Orchard
Gårdstensdalen’s orchard har 15 apple trees, 7 pear trees and 5 cherry trees. It was planted in 2013 in a green area behind the school Gårdstensskolan. In the green area there are also tennis courts and a playground. Direct link.

Hisingspark’s Orchard
The orchard in Hisingsparken (”The Hisingen Park”) has 20 apple trees, 6 pear trees, 3 plum trees and 5 cherry trees. It was planted in 2014, but there are also older fruit trees. Here you can sit down in one of the hammocks and just enjoy.

The orchard is placed next to Hisingsparken’s playground that, among other things, has a big apple to play in. Direct link.

Karlsro field’s Orchard
On parts of the grass area at Karlso field, that have earlier been used as a football field there is now about 20 fruit trees (pear, apple and plum). The trees has been moved here from the prior orchard in Landeri park next to Korsvägen, but were moved when the construction of Västlänken began.

The place is just south of Annedal’s traffic junction that connects Dag Hammarskjöld’s motorway with Per Dubbsgatan that goes up to the Sahlgrenska hospital. Direct link.

Positivparken’s Orchard
Positivparken’s fruit orchard has six apple trees, four pear trees, six cherry plum trees, one mulberry tree and one quince tree. Here you will also find currants, arctic bramble, gooseberries and blueberries. The fruits and berries are of different kinds and tastes, so they are not all ripe at the same time.

The orchard was planted in 2012, next to Ekebäcksgården between Positivparken’s parkour and playground. You can also find chairs and tables if you need a rest. Direct link.

The orchard was planted in 2014 at Vebacken, between Ekonomigården and Dalen’s ball courts. It’s like a little park within the park, with meandering paths, benches – and trees and bushes, of course. Direct link.

Stobbée’s garden’s Orchard
The fruit grove includes 12 apple trees, 3 pear trees, 7 damson trees, 5 plum trees and 1 cherry tree, which are planted at different times. Most of the trees are old and fully grown. The garden is inside Stobbée’s garden, which is part of the Klippan cultural reserve. Direct link.

Vårvädersgatan’s Orchard
In the orchard at Vårvädersgatan there are six apple trees, three pear trees, four plum trees and three mulberry trees. They were planted here in 2013. The orchard is located in a small park, surrounded by low-rise houses and the road from Vårväderstorget goes by a line of old cherry trees.

There are a lot of elms and little leaf linden at the fruit grove and a cultivation area run by a farming association. Direct link. 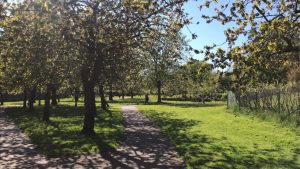